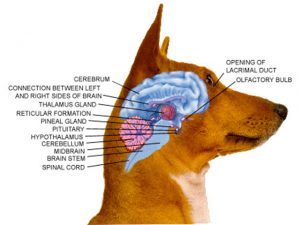 Seizures are an uncoordinated firing of the neurons usually within a portion of the brain called the cerebrum.  It is not understood why these mechanisms do not function normally, but is thought to be due to a chemical imbalance.

Epilepsy is a disorder of recurring seizures – the seizures can be single or may occur in clusters, and they can be infrequent and unpredictable or may occur at regular intervals.  It generally starts in dogs 6 months to 5 years of age, and most usually at 2-3 years of age.  Generally, the younger the dog is, the more severe the epilepsy will be.

Seizures can be caused by many conditions:

Blood glucose levels are too high (e.g. diabetes mellitus) or too low (hypoglycaemia)

Low oxygen levels in the blood that could be caused by anaemia, heart problems or difficulties with breathing

Infections such as canine distemper

Low calcium in females that are nursing young (eclampsia)

Seizures where the cause is not known are called idiopathic seizures (this is the most common cause of seizures in dogs).

Generalised seizures affect both sides of the brain and the whole body, and can be divided into two types – grand mal and petit mal.

Grand mal seizures are the most common, with the dog usually falling on their side and uncontrollable muscle activity such as kicking the legs as if swimming or paddling. Salivation is profuse, and often the dog involuntarily urinates and defecates.  The dog is unaware of his surroundings and actions, and may lose consciousness.  The head will often be drawn backwards.

Petit mal seizures do not result in convulsions, but the animal loses consciousness – it might look like the dog has just collapsed.

Seizures most often occur at times of changing brain activity, such as during excitement or feeding, or as the dog is falling asleep or waking up.

There are several phases to a seizure:

Pre-Ictal phase, or aura, where behavioural changes that can last for minutes or hours occur – the dog may appear restless, pace, seek affection, salivate, whine or hide. He may look dazed, stressed or frightened, seem unsteady or confused, or stare off into space.  A sensory experience that may lead to a behavioural change can occur just minutes before a seizure.

Ictal period, the actual seizure itself. This stage generally lasts from a few seconds to up to 5 minutes.  If the seizure has not stopped within 5 minutes the dog is said to be in a status epilepticus, or prolonged seizure – this is considered an immediate emergency and medical help should be sought.

Post-ictal phase, the recovery period. The dog may seem disoriented, uncoordinated and occasionally temporarily blind.  He may walk in circles or wander aimlessly and bump into things.  He may try to hide.  The dog may have an increased thirst and increased appetite.  This period may last several minutes to days.

Epilepsy occurs in all breeds of dogs, including mixed breeds.  It can be a genetic trait, and can pass down through generations within one family.  Beagles, Keeshond, Belgian Tervuren, German Shepherds, Irish Setters, Poodles, Vizslas, Saint Bernards, Springers, Malamutes and Huskies, Cockers, Collies, Dachshunds and Golden and Labrador Retrievers have a higher tendency to develop epilepsy.

Treatment is never curative, the goal being to decrease the frequency, severity and duration of the seizures.  Most drugs commonly used are given orally, and must be given regularly - and once started they must be given for life.  It is recommended that the dog does not swim whilst he is receiving treatment, to prevent accidental drowning should he have a seizure.

A single, mild seizure is not an emergency and rarely indicates the need for long-term treatment.

A dog will not swallow his tongue during a seizure.  The most important thing for an owner to do is to stop the dog from falling or hurting himself by knocking into objects.