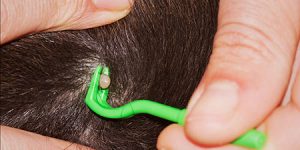 Lyme disease is one of the most common tick-transmitted diseases in the world, but only causes symptoms in 5-10% of affected dogs.  It is caused by a spirochete (bacteria) species of the Borrelia burgdorferi group.

Symptoms don’t always appear for all dogs with Lyme disease, although some will show swollen lymph nodes or lameness.  The dominant clinical feature is recurrent lameness due to inflammation of the joints.  Sometimes the lameness lasts for only three to four days, but recurs days to weeks later, either in the same leg or in other legs.  This is known as ‘shifting-leg lameness’.  One or more joints may be swollen, warm and painful.

Other symptoms may be:

Stiff walk with an arched back

Damage to the kidneys – Lyme disease sometimes leads to glomerulonephritis – inflammation and accompanying dysfunction of the kidney’s glomeruli (a blood filter). Eventually kidney failure may set in as the dog begins to exhibit signs such as vomiting, diarrhoea, lack of appetite, weight loss, increased urination and thirst, and abnormal fluid build-ups.

The symptoms of Lyme disease in dogs differ from those in people, and usually occur much later after the tick bite.  Clinical illness in dogs usually occurs 2 to 5 months after a bite from an infected tick.  Dogs do not develop the typical rash or the circular area of redness around the bite (erythema migrans) which is seen in people.