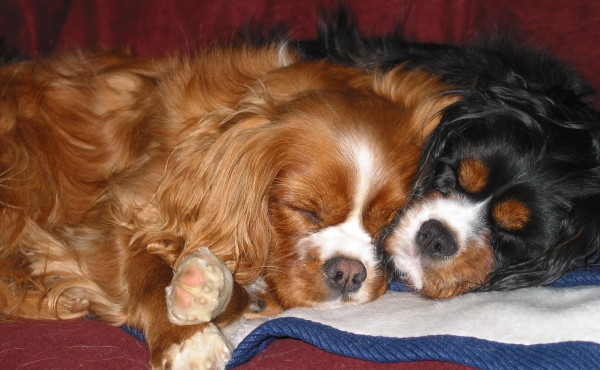 05 Mar 2015 - Unfortunately the cancer had proved too aggressive, and Casey died.

27 Feb 2015 - Casey was diagnosed with two different sorts of cancer, acute Cutaneous Lymphoma in his back and abdomen, and Neuroendocrine in his kidney.  By this time he had over 30 lumps across his back and shoulders.  He had his first treatment of chemotherapy.

08 Feb 2015 - Three lumps were found on Casey's back.  By the time a vet appointment had been made, these had increased to 10 lumps.

Easter 2014 - Shandy's prolapsed discs became so bad that he is unable to walk any more.

03 Feb 2014 - Shandy started a course of acupuncture for his prolapsed discs - unfortunately in his case this did not help.

13 Sept 2013 - Shandy had an MRI scan, which identified 5 prolapsed discs in his back.  Unfortunately it was decided that these were inoperable.

16 May 2013 - Shandy had his bad eye removed, following a melting ulcer in the eye with the tumour.

15 Mar 2013 - Casey had an operation to remove broken bone in his elbow.  He was also tested for possible cancer in his bowel, but this came back negative.

07 Sept 2012 - Shandy was diagnosed with a tumour in one of his eyes.  His pupil had blown and become unresponsive.  It was decided to treat with eye drops.

21 April 2011 - Casey had an operation to remove a malignant tumour on his chest.

Feb 2005 - Casey took a dislike to his new dog walker and swollowed part of his toy. One operation later, and the toy foot is removed from his abdominal.

24 Jan 2003 - Shandy had his lump operated on - it was tested and was deemed to be a developmental abnormality (his body decided to grow a 3rd ear!)

Sept 2002 - Shandy developed a lump on his side within a couple of weeks of going home. The vets took a sample of the fluids, and felt it safe to leave until he'd finished growing.

03 Aug 2002 - Our new Mummy came to visit us. Shandy was the only Ruby Cavie available, but Mummy had a choice between 2 of us Black & Tan Cavies - I'm pleased she chose me!