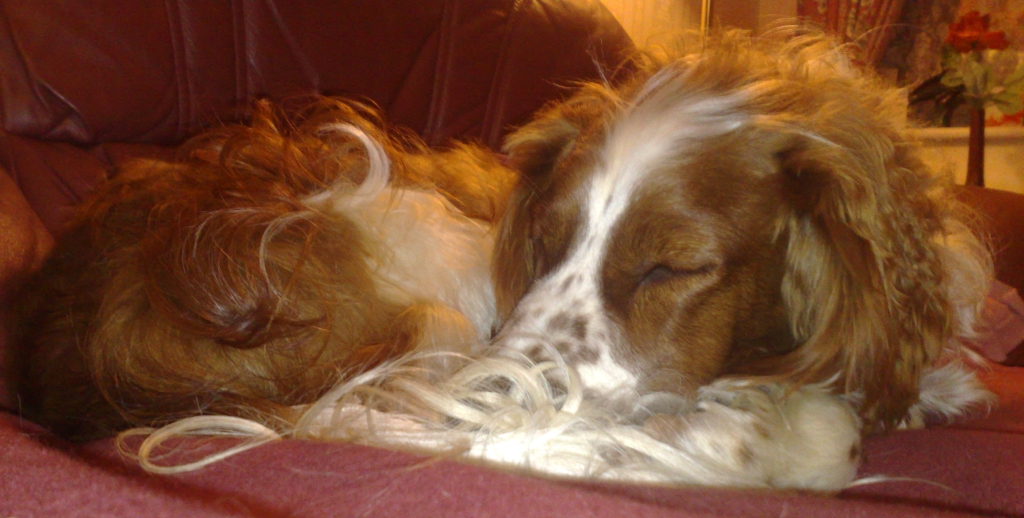 Red and White in colour.  Strong, merry and active.  High spirited with boundless energy.  Affectionate, clever and perceptive.  Breed is not split into show and work strains.  Smaller than the English Springer Spaniel and larger than the Cocker Spaniel.  Thrive on human contact and companionship.  Training is best based on patience and kindness.  Tend to line-hunt and retrieving skills vary.  May test the training expertise of the handler in order to achieve success.  Hunting is thorough and persistent where game scent is present.

This type of dog was bred for hunting rabbits, birds and other game in the undergrowth and getting them to run or fly, originally for the falcon but nowadays for the gun.

This was the original meaning of springing and hence the term "springer".  In the Principality the Welsh Springer Spaniel was known as a separate and distinct variety and can be traced with certainty to the eighteenth century, although the term "spaniel" was first found in the 1300s.

An article in Gundog Magazine can be found here

The Welsh Springer Spaniel is a strong, merry, active spaniel easily identified by its rich red and white coat and comparatively small ears.

It should be symmetrical, compact, not leggy and obviously built for endurance and hard work.  The Welsh Springer Spaniel should have a kindkly disposition, not showing aggression or nervousness.

Popularity of the Breed

Many dogs are still used for their traditional purpose and certainly an active outside life suits the breed, with at least one good free run daily.  Welsh Springer Spaniels need mental exercise as well as physical exercise.  They don't like to be left out and prefer to be involved with all the family activities.

Even if you do not wish to work your Welsh Springer Spaniel, a degree of training using kind but firm methods is essential in order to have a sociable and socialised pet.  Welsh Springer Spaniels have an immense energy and a strong nose for following game scents, even if it is not your interest.

The breed has a Joint Health Group where representatives of all the Breed Clubs pool information for the good of the breed.  Welsh Springer Spaniel Club members are made aware of any health issues via the Club's Year Book, Newsletters and website.

A very small percentage of Welsh Springer Spaniels can be affected by hereditary conditions such as fitting, hip dysplacia and glaucoma.

Members of the Welsh Springer Spaniel Club are encouraged to make use of all available health screening tests.

Welsh Springer Spaniels are highly intelligent and versatile dogs, they can frequently be seen participating in the following activities - Showing, agility, obedience, Pets as Therapy, Hearing Dogs for Deaf People, heelwork to music and working in the field.

Local classes are a good place to start training.  The Kennel Club can supply a list of these.  Contact them on: 0870606 6750 or www.thekennelclub.org.uk.

Welsh Springer Spaniels are renowned for the excellent noses, to the extent that they are unwilling to hunt out areas where their noses tell them there is no game.  Training may be necessary to encourage hunting to a pattern for competition purposes.  Welsh Springer Spaniels tend to follow the game scent in lines rather than thrash through the cover quartering the ground.

In terms of retrieving, once the art is learnt they prefer difficult retrieves and are easily bored.  The action accompanied by a puzzled look portraying: "You can get that one, while I go off hunting".

Welsh Springer Spaniels are certainly a challenge to train but with many opportunities to compete in breed club and minor spaniel tests and at the highest level - Field Trials - as well as beating, picking up and rough shooting, it is a very worthwhile and satisfying pursuit.

Even if your interest is not competition work or gaining a certificate, your Welsh Springer Spaniel has been bred for centuries to carry out flushing tasks for his handler.

About the Welsh Springer Spaniel Club

As custodians of the breed, the Club's aim is the promotion of the best breeding for exhibition and working according to the standard defined, published and endorsed by the Club and approved by The Kennel Club.  The purpose is to keep the breed as true to type and as sound and healthy as possible, and to further the training and working of the breed.

Becoming a member of the Welsh Springer Spaniel Club, the parent club for the breed, entitles you to: an annual Year Book and two Newsletters a year providing a wealth of information on breed health issues, events such as working tests, field trials and training days, show dates, show / working results and fundays.  For further information, please contact the Secretary - email: secretary@wssc.org.uk or www.welshspringerspaniel.club/