Fragmented Medial Coronoid Process is the most common form of elbow dysplasia, more commonly found in larger breeds such as the German Shepherd, Labrador, Retriever, Rottweiler and Bernese Mountain Dog.

Fragmented medial coronoid process is a condition in which a small piece of bone on the inner side of the joint has broken off of the ulna bone. This piece of bone irritates the lining of the joint and grinds off the cartilage of the adjacent humerus (similar to having a pebble in your shoe).

FCP starts by formation of micro-cracks in the bone of the coronoid process - a type of stress fracture.  This happens due to excessive mechanical forces being transmitted through the coronoid process..  The precise cause of this varies between different dogs, but in most dogs is a result of abnormal shape, size or mechanical relationship between the three major bones that make up the elbow joint - for example, where the radius is slightly short, where the ulnar notch doesn't fit properly or where the muscles pull excessively on the ulna by comparison with the radius.  As the micro-cracks form, bits of bone and cartilage can fracture off completely (Fragmented Coronoid Process) or the cartilage covering on the top of the bone (within the elbow joint) can become damaged or eventually worn away (Medial Coronoid Disease).

Typically the condition is identified in young dogs between 5-18 months old.  Symptoms include pain, lameness, stiffness, reluctance to exercise or play, or general depression.  However, many dogs have the disease in both elbows, and may become accustomed to the disease over a long period of time, so the symptoms may be very subtle and may only become apparent following examination by an experienced orthopaedic surgeon.  In some dogs symptoms may not be shown for many months or years.  Elbow dysplasia can occur in both elbows and so stiffness may occur in both forelimbs.  Lameness can occur acutely or be of a more insidious onset.

Osteoarthritis, initiated by elbow dysplasia, may progress later in life to cause pain, stiffness and lameness.

The exact cause of elbow dysplasia is not fully understood, but genetic factors combined with environmental factors (nutrition, growth rate, exercise) contribute to the process.

FCP is diagnosed by:

X-rays are the most common test used to help make a diagnosis, although in some early forms of the disease changes seen on S-ray can be very subtle and only limited information obtained

a more accurate assessment can be made with Arthroscopy, which involves placing a camera into the joint through key-hole incision to explore the joint.  Arthroscopy also provides the opportunity to remove cartilage / bone fragments in a minimally invasive manner

If causing problems FCP can be treated with the removal of the fragmented coronoid arthroscopically.

body weight management - not an issue for Zen

nutraceutical supplements (e.g. glucosamine, chondroitin sulphate, Green-lipped Mussel extract, etc) - this was not tried prior to the operation, but both Hal and Zen have these supplements following surgery.

The non-surgical approach did not help Zen, so an operation was recommended.  Hal went straight for the operation, given Zen's assessment and the fact that this disease is genetic.

Hence, both Hal & Zen were treated with Subtotal Coronoid Ostectomy (SCO) - where the damaged part of the coronoid process was surgically removed, along with an additional portion of the remaining damaged coronoid process. 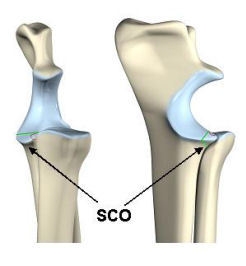 And some links for further information: