How Can A Viral Infection Be Treated? 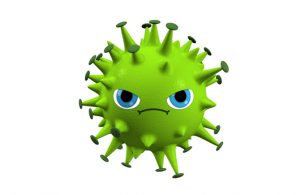 Viruses are tough to fight because they are very tiny, and they inject their own genetic material into the cytoplasm of the cell, leaving the casing of the virus outside of the cell.  They make their way to into the nucleus of the cell and hijack the cell’s replicating and energy processes, inserting their own genetic material into the assembly line so more copies of the virus are made rather than copies of the cell itself.  As the virus becomes so integral to the cell, it is difficult to kill the virus without killing the cell that hosts it.  Very few drugs can treat a viral infection – antiviral drugs that can are quite toxic.

Due to the way viruses replicate, there are usually millions of copies of the initial virus in existence before symptoms are felt.  The replication process continues until the body’s own immune system recognises the infection and releases its own soldiers to combat and remove the virus from the system.

Viruses have no life span; they can become dormant when sneezed onto a pile of dirt. Forty years or so down the road when a wind blows fragments of that dirt bearing the tiny virus into someone's nose, the virus will become active again!

A virus cannot be killed using antibiotics. Most treatment comprises of supporting the dog's systems (including the provision of fluids to prevent dehydration), preventing or treating secondary infections with the use of antibiotics, and nursing the dog back to health.

However, using a more holistic approach, there is more that can be done.  Nosodes can be used to prime the immune system and get it focused on the virus much quicker and more effectively.  And herbs, vitamins and natural antivirals can be fed to help the body fight the virus:

Zinc, selenium – help prevent replication of the virus and build up the white blood cell count.

Garlic - Garlic is anti-viral, anti-fungal, and antibacterial. It not only will help fight the virus, it will help kill any secondary infections trying to take root.

Colloidal Silver – believed to interfere with the enzymes that allow viruses (and bacteria and fungi as well) to utilize oxygen.

Elderberry – enhances the immune response with higher levels for antibodies in the blood, inhibits a virus’s ability to penetrate healthy cells.

Green Tea – the flavonoids in green tea fight viral infections by preventing the virus from entering host cells and by inhibiting replication.

Brewers yeast – can treat viral infections. However as some dogs can be sensitive to yeast it should be introduced slowly.

Do not feed the virus with sugar (avoid foods which naturally contain sugar).

If the dog does develop a temperature (either a fever or a cold) then conventional medicine will normally try to return the body temperature to normal.  However, a fever is the body’s natural way to slow down the replication of the virus and allow the body time to fight, so the dog should be made comfortable whilst letting the fever take its course.

The body also reacts against viruses with inflammation, and this inflammation is either directly toxic to the virus or helps to physically expel the virus from the body (e.g. a sneeze or a cough).  For this reason it is critical not to suppress symptoms, they are nature’s way of expelling infections.