Why Do Dogs Vomit? 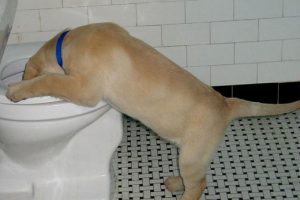 Dogs can vomit for a number of reasons – sometimes these are benign, and sometimes as a result of a serious condition.

Benign reasons for vomiting include:

Expelling something from their stomach that they shouldn’t have eaten – this can irritate their stomach, or the item could be indigestible.

Motion sickness. Medication might be needed to control the vomiting, but this might also be possible to treat via behavioural training.

Bilious vomiting syndrome (vomiting in response to bile-induced inflammation of the stomach). It is often called hunger pukes, as dogs usually vomit in the morning after having not eaten all night.

More serious reasons for vomiting include:

Toxin exposure. Other symptoms include loss of appetite, depression, vomiting, dehydration and abdominal pain.  Treatment depends on the toxin injected, but activated charcoal may help.

Gastrointestinal obstruction, caused by a foreign material, tumours, displacement, etc.
Tumours are more common in middle-age or older dogs.  Symptoms may also include chronic diarrhoea, weight loss, poor appetite and dark, tarry stools.  Treatment depends on the type and location of the tumour.
With obstructions due to foreign bodies or splenic torsion, diarrhoea, loss of appetite, and depression and/or abdominal pain may be seen as the condition progresses.  Surgery is most likely.

Gastroenteritis (inflammation of the stomach and intestinal tract) – medication to control the vomiting and protect the stomach is likely to be prescribed, the underlying cause will also need to be treated. Fluids may be given if necessary.

Inflammatory bowel disease. This is more common in middle-aged dogs, and also as lymphocytic/plasmacytic enteritis (LPE) in German Shepherds and Basenjis.  Often the diet needs to be modified, wormers and antibiotics are used to treat or prevent hidden infections, probiotics and anti-inflammatory drugs will help the bowel, and immunosuppressing drugs can be used if there is no response to other treatment.

Intestinal parasites – usually young dogs or those who are immunosuppressed. Also likely to have diarrhoea, and other symptoms depending on the parasite.  Treat with an appropriate wormer.

Some types of cancer, including pancreatic cancer.

Liver disease or gall bladder inflammation. Yellow discolouration of gums and white of the eyes may also be present.  Medications and fluids should be used to control the vomiting and liver disease, and surgery may be possible.

Kidney disease is more common in older dogs. There is likely to be increased thirst and urination, or no urination if there is an obstruction.  Diet changes are likely to be needed, and medications to control the kidney disease.

Infections (bacterial, viral or fungal).
Bacterial infections are most common in young, kennelled dogs or those who are immunosuppressed.  Other symptoms can include bloody diarrhoea with loss of appetite, depression and fever.  Antibiotics, intravenous fluids and supportive care may be needed in more serious conditions.
Viral infections are also more common in young dogs who have not yet built up sufficient immunity.  Other symptoms include loss of appetite, fever, depression, diarrhoea, abdominal pain, coughing, and lethargy (depending on the virus).  The most common treatment is intravenous fluids and antibiotics to prevent secondary bacterial infections. However, depending on the virus there may be other options available.

Addison’s disease – more common in young to middle-aged female dogs. Medications are likely to be prescribed to control the effects of hypoadrenocorticism.

Gastrointestinal ulcers – medication is likely to be provided to control the vomiting and to protect the lining of the stomach and intestines whilst the underlying cause is treated. Fluids may also be provided if needed.

Drug side effects – ideally change the drug therapy, but if this is not possible then the provision of medicines to control the vomiting is an alternative.

Food allergies or intolerance – can also involve a sudden onset of diarrhoea. Withhold food as needed and then reintroduce normal food without the offending ingredient.

Sudden diet change – withhold food as needed and then switch to a bland diet, before slowly reintroducing a normal diet.

Pancreatitis arising from dogs eating a high-fat meal. This is more common in Schnauzers and Yorkshire Terriers, as well as middle-aged dogs.  Vomiting may also be accompanied by dehydration and a painful abdomen.  Initial treatment is to restrict oral intake, administer fluids and provide pain control and other supportive care.  Maintenance should be managed via a low fat diet.

Bloat – large breed dogs or those with a deep chest are most at risk. Symptoms include vomiting, retching, bloated abdomen.

Infected uterus (pyrometra). Surgical removal of the uterus is the most likely treatment, together with medical treatment.

Peritonitis (e.g. perforated intestine). The abdomen is likely to be painful, and there may be a fever.  Antibiotics and fluids are likely to be used, and possibly surgery, depending on the cause.

Vestibular disease or brain disease – more common in older dogs, who are also likely to be suffering from incoordination. Medications can be provided to control the vomiting, and other treatment will depend on the specific condition.

Septicaemia – likely to be accompanied by fever. Antibiotics and supportive care are likely to be prescribed.

Gastroesophageal reflux. This is more common in brachycephalic breeds, with symptoms being drooling, licking of lips and bad breath alongside vomiting.  Treatment involves feeding smaller, low-fat meals together with medications to help protect the oesophagus, reduce stomach acid and increase movement of food out of the stomach

NB with regurgitation, the food that is expelled comes from the mouth or the oesophagus, not the stomach.  Vomiting involves the forceful contraction of stomach muscles, regurgitation does not.  Both vomiting and regurgitation can occur right after eating or drinking, or up to several hours later.