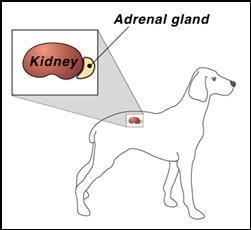 Cushing’s disease is a condition that results from the chronic overproduction of glucocorticoid in the body.  In a normal dog the pituitary gland produces a hormone called ACTH, which stimulates the adrenal gland to produce the glucocorticoid hormones necessary for the function of many systems in the body (including responding to stress, controlling weight, fighting infections, keeping blood sugar levels in check, managing mineral balance, the structure of connective tissue, some white blood cell production and skin health).  If something goes wrong in the pituitary gland or the adrenal gland then too much glucocorticoid is produced and Cushing’s disease develops.  The metabolic process will be hampered, leading to gastrointestinal disorders and hypertension.

Cushing’s disease is considered a disease of middle age and older dogs.  The usual age of contracting the disease is around 6-7 years, with a range of 2-16 years.

The most common cause of Cushing’s disease is a benign (non-spreading) pituitary tumour.  Excessive glucocorticoid administration (used for allergies, inflammation or as a replacement therapy for low cortisone levels) can also cause Cushing’s disease.

The symptoms of Cushing’s disease are a combination of the following:

Increased water consumption and urination – dogs drink between 2 and 10 times the normal amount of water.

An increase in appetite – dogs may begin stealing food, begging continuously and become very protective of their food.

Abdominal enlargement – the enlargement is a result of the shifting of fat to the abdominal area and a weakening and wasting of muscle mass in the abdomen.

Hair loss and thin skin – hair loss is one of the most common reasons that owners first take their dog to the vet. The hair loss usually starts over areas of wear such as the elbows, and progresses to the flanks and abdomen.

Fat pads on the neck and shoulders

Lack of energy and/or an inability to sleep

There are two distinct forms of Cushing’s disease:

Pituitary dependent hyperadrenocorticism (PDH) involves the over-secretion of ACTH by the pituitary gland, most likely due to a pituitary tumour. This is the most common form of Cushing’s disease, responsible for around 80% of the cases.

Adrenal-based hyperadrenocorticism – usually as a result of an adrenal tumour that causes an over-secretion of glucocorticoids.

Diagnosis of Cushing’s disease is done from:

Low dose dexamethasone suppression test – this looks at how the dog response with a man-made version of cortisol (dexamethasone). Blood samples are taken before and after the hormone is given.

Adrenocorticotropin hormone (ACTH) stimulation test – this measures how well the adrenal glands work in response to the hormone ACTH. Blood samples will be taken before and after the ACTH is given.

Abdominal ultrasound – this will help to see if there is a tumour on the adrenal glands.

Surgery if an adrenal tumour is identified

Oral medications, which can reduce the number of corticosteroid-producing cells. However, these oral medications can have serious side effects, so the dog needs to be closely monitored.

Usually a dog can live an active, normal life with medication to treat Cushing’s disease, although he’ll need the medication for the rest of his life.

Left untreated, Cushing’s disease will progress and can lead to life-threatening disorders such as diabetes, congestive heart failure, and liver and kidney failure; also chronic illnesses such as hypothyroidism and infections of the skin, ears, gums, eyes or bladder.

Addison’s disease is the opposite of Cushing’s disease, and results from too little cortisone.