Health Risks Associated With Being Overweight 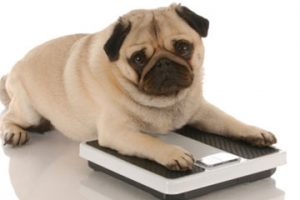 Being overweight has a number of risks associated with it:

In overweight animals, the lungs cannot function properly.  Fat deposits around the lungs and in the chest restricts the expansion of the lungs.  The extra fat in the abdomen pushes against the diaphragm, which separates the abdominal cavity from the chest.  This also results in less space in the chest for the lungs to expand on inspiration.  The increased quantity of tissue also puts an increased demand on the lungs to supply oxygetn.

Overweight dogs are more prone to a collapsing trachea and laryngeal paralysis.  Untreated, these airway conditions can lead to a respiratory crisis which could be fatal if not treated.

Obesity can cause the elasticity of lungs and chest tissues to alter, severely affecting breathing.

The liver stores fat, so when a dog is overweight an increased amount of fat will build up in the liver.  This leads to a fatty liver disease called hapatic lipidosis, causing decreased liver function.

Hepatic lipidosis can also result in an abnormal bile flow in the liver and deficient hepatic function, which affects the liver’s capacity to detoxify the bloodstream and the ability to turn raw fat into nutrients beneficial to the body.  Hence toxins accumulate inside the body, and these can cause further complications.

Hepatic lipidosis might lead to the rapid release of high amounts of fat into the bloodstream if the fat-laden cells in the liver rupture.  This fat will most probably obstruct the arteries.

If fat is deposited into the liver cells, they liver turns yellow, greasy and its size increases.  As the condition develops, jaundice becomes visible.

Dogs who are overweight have less endurance and stamina.  Carrying all that weight around takes a lot more work.  The heart, muscles and respiratory system are all asked to do more than they were designed for.

Fat is an excellent insulator – in summer it is much more difficult to regulate your body temperature if you have such an insulator.

70% of heat loss in dogs occurs by radiation and convection through the skin.  When the core body temperature rises, blood vessels dilate, the heart pumps harder and there is increased blood flow to the skin.  Heat is then lost to the environment through the skin.  But in obese dogs the large layer of fat under the skin serves as insulation and can prevent some of the heat from getting to the skin to be released.

Heat exhaustion can affect the dog’s digestive system, causing diarrhoea, nausea and vomiting.  It can also affect the skin, causing t to turn red, and it can increase respiratory rate.

Pressure on limbs and joints - Cartilage deteriorates, causing arthritis and increasing the possibility of an anterior cruciate ligament tear.

Skin problems and diseases - Irritation and infection can occur in the extra skin folds.  Also the dog can’t groom itself so easily, resulting in an unhealthy looking coat.

Digestive disorders - There is an increased risk of developing constipation, and the dog may also have a problem with intestinal gas and flatulence.

Increased risk of cancer, including a particular type of cancer of the urinary bladder and mammary tumours