How Are Drugs Distributed Throughout The Body? 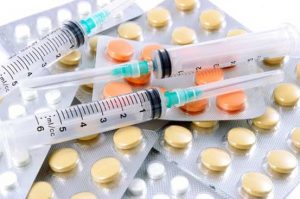 Drugs penetrate different tissues at different speeds, depending on the drug’s ability to cross membranes.  In general, fat-soluble drugs can cross cell membranes more quickly than water-soluble drugs can.  For some drugs, transport mechanisms aid movement into or out of the tissues.

The level of drug in the body can be prolonged in a couple of ways:

Some drugs accumulate in certain tissues, which then act as reservoirs of extra drug.  These tissues slowly release the blood into the bloodstream, keeping blood levels of the drug from decreasing rapidly and thereby prolonging the effect of the drug.

Once absorbed, most drugs do not spread evenly throughout the body.

Drugs that dissolve in water (water-soluble drugs) tend to stay within the blood and the fluid that surrounds cells (interstitial space).

Drugs that dissolve in fat (fat-soluble drugs) tend to concentrate in fatty tissues.

Other drugs concentrate mainly in only one small part of the body (for example, iodine concentrates mainly in the thyroid gland) because the tissues there have a special affinity and the ability to retain that drug.

Some drugs accumulate in certain tissues (including fatty tissues), which then act as reservoirs of extra drug.  These tissues slowly release the blood into the bloodstream, keeping blood levels of the drug from decreasing rapidly and thereby prolonging the effect of the drug for days, weeks or months.

The liver alters the drug to make it inactive so that it can be excreted from the body.  During biotransformation, the drug is broken down into smaller components (metabolites) by the enzymes in the liver cells.  This makes them non-toxic and soluble so they can travel in the bloodstream to the kidneys, and onwards to be excreted.

For some drugs the gastrointestinal absorption rate is reduced by the presence of food in the gut, whilst some drugs are not affected by food and some for some others the absorption is enhanced by food (in particular, bile secretion).  Some drugs are irritation to the gut and should be administered with meals to reduce adverse effects.