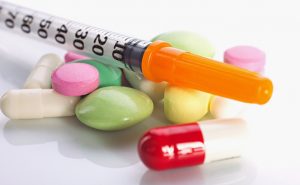 Oral drugs are swallowed by the dog.  They can come in many forms – tablets, capsules, chew, liquids, sprays and suspensions.

Injected drugs are administered directly into the vein (intravenously), under the skin (subcutaneously) or into the muscle (intramuscularly).

Generally, oral drugs are absorbed through the lining of the stomach and the intestines.  They pass through the liver and then enter the bloodstream to be distributed.  Drugs injected into a vein take effect immediately, and those injected under the skin or into muscle reach the blood stream in 10-30 minutes.  For this reason, intravenous drugs are the fastest acting available, followed by subcutaneous and intramuscular drugs, and drugs taken orally are the slowest to take effect on the dog.  Hence if speed is of the essence, injected drugs are better than oral drugs.

However, the levels of injected drugs in the body are not maintained as the drug is quickly removed from the system by the liver and kidneys.  Intravenous drugs are the quickest to leave the body, followed by subcutaneous and intramuscular drugs.  Oral drugs stay in the body much longer, and they can be designed to dissolve over a longer period of time, maintaining a relatively consistent effect on the body.  Hence if the level or a drug needs to be maintained then oral drugs are a better choice.

For this reason, vets will often administer an injection in an ill dog, but then give oral medication to continue the treatment – the injection will take effect so much quicker, but the tablets will then maintain a steady level of the drug in the body.

There are two key downsides to oral drugs:

If the dog is sick or has diarrhoea then the drugs might not have been absorbed (and it is not always possible to know if this is the case – how do you know whether to re-administer?)

Once a medication has been given, it cannot be ‘taken back’. Should the dog have an adverse response to a product then clearing the body of the substance having a toxic effect becomes quite challenging.

Many medications are most effective when given by injection, and certain medications can only be given this way.  Insulin, for example, can only be administered by injection as it is destroyed by acids in the stomach.  However, it is much easier for dog owners to give oral medication (where possible) than to give injections regularly.

Some oral medications such as transmucosal sprays and homeopathic remedies work via the gingival tissues and mucus membrane in the mouth – as long as these have been in contact with the mouth for 30 seconds it is likely that the drug has been absorbed, so they are less susceptible to sickness and diarrhoea.