How The Manufacture Of Dog Food Started 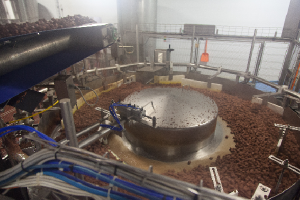 In 1860 the first processed dog food was made by James Spratt (from Ohio) – he observed street dogs eating the non-perishable biscuit food from ships that was made from processed cereals and from this he developed a biscuit made of wheat, beet root, vegetables and beef blood.  This biscuit sold well, and soon other companies began to make baked dog products too.

After WWI horsemeat became very cheap with the invention of cars.  A horse dealer started canning horsemeat and selling it as dog food.  However, during WWII the metal used for canned dog food was set aside for the war and dog food manufacturers experienced difficulties in maintaining high quality dog food.

The depression in the 1930’s prompted dog owners to look to grains and cereal products rather than meat, as this was a less expensive way to feed their pets.  However, commercial dog foods in the early 1940’s could not maintain an Army dog in good working condition, so both commercial dog food and additional meat to supplement the diet were purchased.  This lead to a dog food being developed combining ground horsemeat and herring.  Canned meat products were introduced in the 1940’s and in 1943 a dehydrated dog food was introduced – ‘just add water’.

Sales of dry processed dog foods became much more popular after World War II, as mill operators, grain dealers and meat packing plants found that the pet food industry would pay for waste products that would otherwise be discarded.  The meat and grains were cooked together for many hours or even days to kill bacteria and disease and then formed into pellets, which were easily bagged for convenience.  With the economy booming, people could afford the luxury of pet food.

Purina then developed a new technique called ‘extrusion’, where the ingredients are combined and cooked together in a liquid form and then mechanically pushed through an extruder.  This extruder expands the piece of dog food, and it is then baked again to form a larger, lighter pellet.  The first dry kibble pet foods were produced in 1956.

By the late 1960s most dog owners were feeding canned or dry dog foods, and the veterinary industry started promoting these as complete foods, with protein diets being labelled incomplete.  The first pet food specifically formulated for the unique nutritional needs of puppies was introduced in the early 1960s.