Why Should Puppies Not Partake In Rigorous or Prolonged Periods of Exercise?

Puppies should not partake in rigorous or prolonged periods of exercise due to their growth plates and the centre of their bones still being elastic.

Growth plates are the soft areas that sit at the ends of the long bones in puppies and young dogs.  They contain rapidly dividing cells that allow bones to become longer until the dog reaches puberty.  These growth plates gradually thin as hormonal changes take place during puberty, signalling the closure of the growth plates (as well as other changes).  In puppies, this closure is normally completed by approximately 18 months old, although will depend on breed and size of dog.  (The text says that the growth plates harden at about 10-14 months old, but this is too early for larger dogs.)

These below two diagrams show the growth plates in a puppy – the first being an X-ray that clearly shows the bones still have a way to form.  And the third diagram shows the average closure time of the different growth plates. 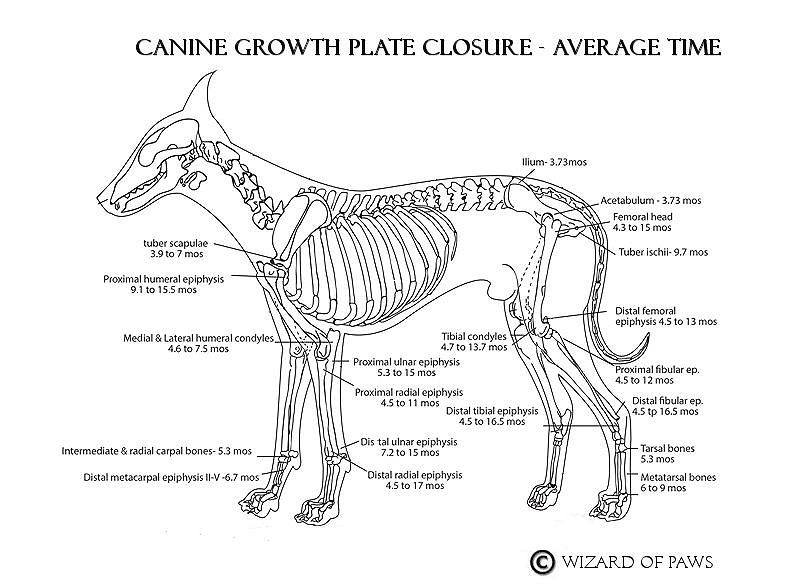 Until the growth plates close, they are soft and vulnerable to injury.  After puberty, they growth plates calcify and the rapid cell division ends.  The growth plate then becomes a stable, inactive part of the bone, known as an epiphyseal line.

A dog’s bones are held together with muscles, tendons and ligaments – soft tissue.  In an adult dog, if a joint experiences a stress such as bending the wrong way or rotation too much, the bones will hold firm and a soft tissue will be pulled, resulting in a sprain.  This sprain will heal over time and leave the dog fit and healthy.  In a puppy, however, his muscles, ligaments and tendons are stronger than his growth plates, so his growth plate is liable to be injured instead – the puppy’s own soft tissue can pull apart his growth plate.  Injuries to the growth plate may not heal properly, or not heal in time for the puppy to grow up straight and strong – injury to a growth plate can result in a misshapen or shortened limb, which in turn can create an incorrect angle to a joint.  This in turn can make the dog more prone to further injuries when he grows up.

Probably the biggest cause of growth plate and soft tissue injury is repetitive exercise with a young puppy – this is why free-play sessions are so important and long hikes and walks should be avoided until the puppy is about 18 months old.

Additionally, a puppy’s bones in general are ‘softer’ – maximum bone density is not reached until after puberty.  The outside, fibrous layer of the bone (periosteum) is relatively strong in relation to the elastic bone inside, so any exercise that puts torque on a bone puts the puppy at risk for a fracture.  A spiral fracture is where the bottom half of the bone twists in one direction and the top half twists in the other: 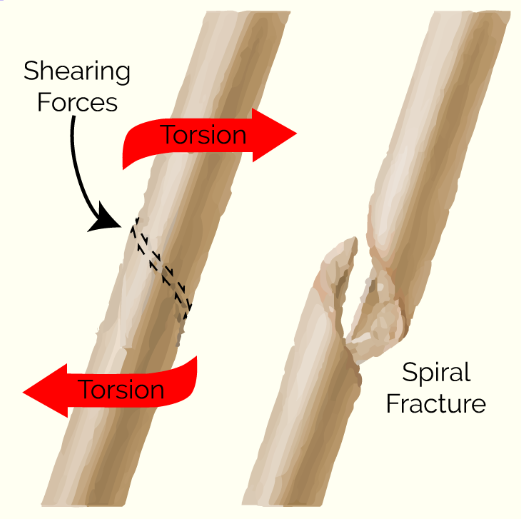 This kind of juvenile injury is known as ‘Toddler Fracture’ in humans.

Puppies also don’t have the cardiovascular system for endurance, and until they mature they are probably not able to build much endurance, no matter how much they exercise.

Puppies are more likely to injure themselves due to their lack of co-ordination, and they are also more susceptible to the heat and cold.

For puppies under 18 months old the majority of exercise should be self-directed play – free play, exploring and general wandering around.  If he shows any fatigue, flops down or refuses to walk, he should be allowed to rest.

The general rule is 5 minutes of structured exercise per month of age.

Return to Exercise for Puppies