Apoquel - What Is It?  How Does It Work? 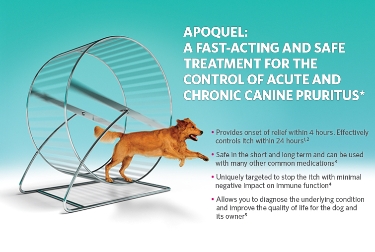 When Apoquel was announced in the US in Jan 2014, it was stated that it could be used to ‘control pruritus, or itching, associated with allergic dermatitis and the control of atopic dermatitis in dogs at least 12 months of age’.  The announcement stated that Apoquel targets the itch of allergic skin conditions at source, and that canine itching affects about one in six dogs whose owners seek veterinary help.  It was also stated that about half of all itchy dogs have an underlying allergic skin condition where Apoquel would be indicated, without the side effects that are common with steroids.

Apoquel is an immunomodulatory drug (it modulates the immune system) – it specifically targets the activity of cytokines that are involved in the stimulation of itch and inflammation, blocking the cycle of inflammation and itch that the cytokines trigger.  Cytokines are chemicals that they body produces when exposed to an allergen, amongst other things.

Apoquel inhibits the activity of inflammatory cytokines by inhibiting Janus kinase (JAK) enzyme activity in the body.  It has minimal activity against cytokines involved in haematopoiesis or innate immune function.

Apoquel can be used for both acute and chronic canine pruritus.  It eases the dog’s itching in as little as 4 to 24 hours, and dog owners have reported that it does relieve itching.  This itching can be caused by a number of factors, including infections, parasites and allergies (flea, food, contact and inhalant).

Treatment with Apoquel consists of administering two doses per day for up to 14 days, and then one dose per day afterwards.  It may be given with or without food.

Side effects of Apoquel have been noted to include:

However, not all of these side effects have been accepted by the manufacturer of Apoquel.

From what I understand, Apoquel has only been tested for 30 days in a masked field study, and after 7 days some dogs were withdrawn from the study due to ill health.  In field studies that ranged from 1 to 610 days (mean time of 372 days) many more dogs showed side effects and had to be withdrawn from testing or at worst euthanised.

But is this a good drug to be administering?  An allergy is an exaggerated and inappropriate response of the immune system, and Apoquel suppresses the symptoms of this.  Suppressing the symptoms of an allergy does nothing to help the body to rid itself of the underlying illness or disease.

How does Apoquel work?

Apoquel works by inhibiting JAK enzyme activity, preventing them from working.  But without JAKs the dog’s immune system, along with other systems, cannot function correctly:
JAK1 is vital for the constant surveillance within the dog’s body to find and destroy abnormal cells that have become cancerous before they form tumours.  It is also an imperative messenger necessary for destroying invading parasites, fungi, bacteria and viruses.
JAK2 is central to the production of bone marrow stem cells that then become red and white blood cells and platelets
JAK3 is needed for the dog’s antibody system (B cells) and its killer T cells to work well.

These JAKs all share information to keep the dog’s body healthy, so by preventing them from working Apoquel seriously undermines the dog’s immune system.

Given the function of the JAKs, it’s hardly surprising to see bone marrow suppression and malignancies amongst the side effects.