Why Do Dog Tails Vary In Shape And Size? 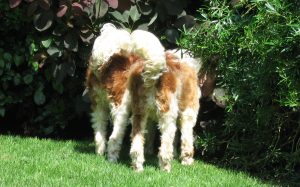 Dog’s tails vary in shape and size based on what the dog has been bred to do.

The curled tail of Northern cold weather breeds are normally brushed and sickle shaped and curl forward.  This allows the tail to help keep the dog’s face (especially the nose) warm as they curl up into a big C, to retain as much body heat as possible when sleeping.  Typical breeds are the Akita, Siberian Husky, Alaskan Malamute, Spitz, Shiba Inu, Keeshond, American Eskimo Dog, Swedish and Finish Lapphunds and the Chow-Chow.

The carrot tail is a fairly short tail that is thicker at the base and tapering to a stumpy tip.  This tail was designed to be grabbed by a farmer, to pull the dog out of vermin holes.  It is typical of a West Highland Terrier.

The otter or swimmer tail works like a rudder for water dogs.  The tails are thick, medium to short in relation to body size, heavily furred and taper to a blunt tip.  Typical breeds are Labrador Retrievers, Chesapeake Bay Retrievers and other Sport class dogs.

The tufted tail is set high on the back, straight and well furred, with a tuft on the end.  It is typical of the Poodle.

The snap tail is a tight curled tail that is also common with Northern breeds and colder climates.  Typical breeds are the Alaskan Malamute, American Eskimo Dog and the Pomeranian.

The sword tail is a regal tail that is generally associated with Great Danes, Swiss Mountain Dogs, American Staffordshire Terriers and many types of Pointers – the HPR dog (hunt, point, retrieve.

The bob tail has a little nub of fatty tissue rather than a full tail, and it’s naturally found on Old English Sheepdogs, Pembroke Welsh Corgis and some Australian Shepherds.

The gay tail is thick, with a slight curve, and has a small, usually white, tuft at the tip.  It is held horizontal.  The white tip helps hunters find their dogs during a hunt or shepherds follow their dogs home at the end of the day.  Typical breeds are Beagles, Cavalier King Charles Spaniels, Border Collies and Wire Fox Terriers.

The saber tail are long and held low. Typical breeds are from the herding group, such as German Shepherds, Collies, Belgian Malinois, Belgian Tervurens and Cardigan Welsh Corgis.

A tapered tail is normally thicker at the base, set high on the back and is held straight up or out.  This is typical of the Terrier group, such as Manchester Terriers, Border Terriers, Airedales and also the Dachshund, Dalmatian and English Setter.

A corkscrew tail is a curled tail.  This is typically found on Bulldogs and Pugs.

A whip-shaped tail is a long, narrow and smooth tail that is set low and has a slight curve and is normally held down.  The tail acts like a rudder and brake during high speed chases.  This is typically found on a Whippet, Wolfhound or Ibizan Hound.

A plumed tail is typical of the Belgian Tervuren, Saluki and Borzoi.

A high set tail, appearing as a natural extension of the dog’s body, is likely to indicate Scent Hound ancestry – perhaps from a Beagle, Fox Hound or Airedale.